Welcome to the Dark Web

Maybe you have seen this scenario play out on a TV show; a hacker with malicious intentions goes to the dark web to get illegal contraband or inside information on some dark and sinister group. You might wonder, "Is there such a place as the Dark Web"? The answer is: Yes. And it is probably just as seamy as you imagine.

The deep web is the part of the Internet where the contents are not indexed by search engines. This is just the stuff not open for everyone. This includes webmail, online banking pages, as well as membership sites that you have to enter a password to visit. The dark web, on the other hand, is made up of pages that must be accessed by specific software or browsers that have been specially configured or require authorization. It's like the seedy part of town where you might go to partake in...questionable activities. Well okay, maybe not "you", but someone might go there. So they visit an address that's a door hidden in an alleyway, and have been given a certain knock, or told to say “Vito sent me”, so Otto at the door knows to let you (oops, I mean someone) in. On the dark web, that door in the alley would probably correspond with a .onion address instead of a .com or a .net, and the special knock corresponds to software like the Tor browser. It's just one of the many places you might find some of the web’s "hidden" services. 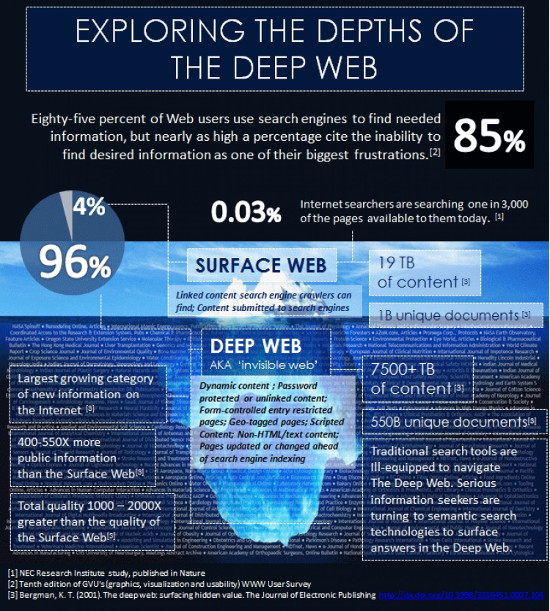 The Clearnet is the opposite of the Dark Web or darknet. It is the unencrypted, indexed Internet. It is the place where websites want to be found. Where people surfing want to be seen. Any site you can find using Google or another of the traditional search engines would be part of the clearnet or surface web.

Added Security for the Dark Web

If you are planning on doing any business on the Dark Web, it's a good idea to know what you are getting into. Just like back-alley business dealings, you want to do things in a safe manner. You never know who you'll run into. Here are some tools that have been developed for greater privacy and security. These tools are not just for the Dark Web, but can be useful on the Clear Web as well:

Tor is software designed to make it hard to track someone’s browsing activities across the Internet. It does this by bouncing them around to other servers before landing at their destination website. It's like taking the long way around to go somewhere, making it harder to be followed.
There is actually a domain suffix .onion that designates the site as an anonymous hidden service and makes the website only accessible through the Tor network. The Tor browser is another tool you can use if you don’t want your Internet Service Provider tracking your browsing activities.

A Virtual Private Network lets you send data over a public network as if it were a private network. It's used to make Internet use more private and secure. When used along with the Tor network it adds another level of privacy.

"Tails," or The Amnesiac Incognito Live System, is free software which can be booted from a USB drive, DVD or SD card to provide end-to-end encryption for your browsing sessions. It helps protect a user's anonymity and privacy. Connection to the Internet is through the Tor network.

Tails won’t save anything on your computer’s hard drive unless you specifically ask it to. Anything saved to the RAM of the computer is automatically deleted when the computer is shut down. It also provides extra software to help securely delete files and clean the disk.

HTTPS is a protocol for secure communication over the Internet. It is used on many websites to increase security. Although it is becoming more and more prevalent for websites to enhance the security of their sites using HTTPS, not all websites have upgraded yet. HTTPS Everywhere is a browser extension developed by the Electronic Freedom Foundation for Firefox, Chrome, and Opera that brings added security to all the websites you visit.

“Pretty Good Privacy,” or PGP, is a type of encryption and decryption used for emails, files, directories, and such for enhancement of security. Basically, it is like you giving them an unlocked "lockbox" to which only you have the key. Anyone can put something in the box, lock it and send it to you but you are the only one that can unlock and open that box to see what is inside. To send them a message they would also give you an unlocked box for you to send data back to them, but they would have the only key to unlock their lockbox. You lock the box before sending it to them and they are the only one that can unlock it.

Not all things found on the Dark Web are evil. Some may be hiding for other reasons. Journalists may choose to meet their sources there to keep them safe. Social media sites like Facebook and Twitter have Dark Web versions for the same reasons. Someone might go there to dodge censorship concerns in the country they are located. Some people just don’t like to be spied upon.

Several social media sites have a Tor .onion address that can be accessed from countries where it is banned. Facebook has a .onion address that can use the Tor network to hide your IP address and mask your location. It also won’t be flagged by Facebook as a hacker trying to log into your address from a different country. It is only accessible from the Tor browser. Facebook’s .onion address can mask your location from anyone spying and it will also let you access Facebook from a location where Facebook use is banned.

One way journalists can protect their sources is to use SecureDrop, an open-source whistleblower submission system for news organizations to accept documents from anonymous sources. It was originally developed by Aaron Swartz. This site is only available as a Tor Hidden Service and requires sources to use Tor, protecting their identity from whoever might be listening in.

Political activists who want to work behind the scenes and not get arrested can use the Dark Net to remain anonymous. Governments and corporations are themselves going online to discover protests and such, so protesters are beginning to go underground in this way. In 2013 Edward Snowden used Tor and the Dark Web to blow the whistle on PRISM, the NSA’s secret data collection program.

The currency of choice in the Dark Web is, of course, Bitcoin. Bitcoin is a new digital currency that is not controlled by any country or bank. It is a peer to peer currency. It is kind of like bartering, for the digital age. All transactions are recorded in the Bitcoin’s public world-wide ledger, which is called the blockchain. Paying for things with Bitcoin works well for Dark Web users, in that it is digital and somewhat anonymous, meaning that it can be made fairly hard to trace.

The Silk Road was a hidden website that acted as a darknet market for illegal drugs and other items. It was named after the trade routes used in the third century to connect Europe, China, and India. It was operated by Ross Ulbright under the pseudonym "Dread Pirate Roberts". It was shut down in October 2013 with the arrest of Ulbright. Ulbright was convicted of drug trafficking and money laundering, then sentenced to life in prison. Within a month Silk Road II was opened. The site’s second run lasted one year before being shut down and its new administrator was arrested. Silk Road III, anyone?
A movie called Deep Web was released in 2015 about Ulbright’s arrest for the Silk Road site. More than $1 billion in drug sales were reported to flow through the site’s first incarnation.

As you might expect down any dark alley in the seamy side of town, you could run into some pretty seedy types of people. According to intelligence agencies, some terrorist groups make first contact with recruits on the surface web and then do further training or planning on Dark Web sites.
Police forces around the world monitor the Dark Web for news of these activities.

Although these sites tend to come and go, with supplies and sites getting confiscated or shut down by the authorities, there are sites on the Dark Web where you can buy things you definitely wouldn’t want your angry, shell-shocked neighbor to get their hands on.

Information And Other Things For Sale

On some sites on the Dark Web, the personal information of internet users becomes available. Credit card numbers, logins and the like can be found. Sometimes the information itself is false. Sometimes the information is valid. About two years ago almost 600,000 Comcast customer passwords were announced for sale. Around 200,000 of them were reportedly still valid at the time that they were listed on the market.
You, I mean someone, can probably buy fake passports and drivers licenses on the Dark Web. When you buy on the Dark Web, however, you can never really be sure of who you are buying from. The anonymity and privacy of the Dark Web go both ways. The person you are buying from may be an (il)legitimate seller, a member of law enforcement or a scam artist.

Just as it shouldn’t surprise you that the Rolex or Tag Heuer watch that you get in the parking lot of the airport, or a back alley is not so much a stolen valuable watch as a cheap knock off, you..., well OK, not you... but someone, shouldn’t be too surprised that something ordered from the Dark Web might not arrive as expected... or arrive at all, for that matter.

Don't Try This at Home, Folks

It goes without saying this article does not condone any illegal activities on the Internet, and this information is intended for educational purposes only. If you partake of any illegal activities anywhere on the Internet you may be arrested. This article is only to let you know who you might meet down that dark alley that is the Dark Net -  I mean somebody might meet...not you, of course.